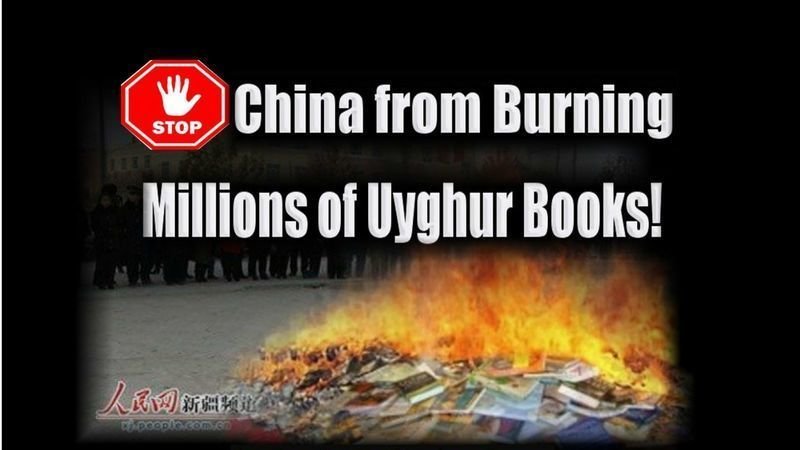 According to a report by ChinaAid on April 2nd, 2018 (http://www.chinaaid.net/2018/04/blog-post_2.html?m=1 the Chinese government started confiscating and burning Uyghur-language books in various parts of East Turkestan. The regime ordered the Uyghur students and their parents to bring the Uyghur-language books from their houses, and warned them that they will be arrested if there are any books found when their houses are searched.

As one of the ancient peoples in the heart of Central Asia, Uyghurs have rich cultural heritage and literary tradition. However, Uyghurs are now facing unprecedented and unimaginable ethnic oppression and cultural genocide by the Chinese regime. One heinous example of this cultural genocide is burning of Uyghur language books.

The Chinese communist regime has carried out numerous large-scale book burning and cultural heritage destruction policies after its occupation of East Turkestan in 1949. During the so-called “Cultural Revolution” (1966-1976), most of the historical documents and literary treasures of the Uyghurs were destroyed. The thousand-year old Uyghur Arabic alphabet was outlawed and replaced by an alphabet based on the Chinese Pinyin system. At the same time, the books in the Uyghur Arabic Alphabet were labeled as “reactionary” and were confiscated and burned. After a brief period of revival of Uyghur culture and literature during the 1980s, the Uyghur language books once again started facing inspection and confiscation since the 1990s.

According to a 2002 report by the Unrepresented Nations and Peoples Organization (UNPO) (http://unpo.org/article/101 the Chinese regime confiscated and burned more than 730 types of books in Kashgar, East Turkestan. Those books included such works as “A Brief History of the Huns” and “Ancient Uyghur Literature” by famous Uyghur author and historian Turghun Almas. Among the hundreds of thousands of books burned, there were 32,320 copies of a single book titled “Ancient Uyghur Craftsmanship”. This book was deemed “dangerous” and banned just because it contained historical documents about traditional Uyghur hand craftsmanship, such as paper making. In the same year, Uyghur language books published by the Kashgar Uyghur Publishing House were inspected and 330 types of books were deemed “problematic”. Those books were stopped from future re-printing and were confiscated and burned.

According to a report by Nicholas Bequelin and published by the Human Rights in China (HRIC) (https://www.hrichina.org/sites/default/files/PDFs/CRF.1.2004/b1_Criminalizing1.2004.pdf in 2002, the Chinese regime banned 52 out of the 118 magazines published in East Turkestan at the time because of their “sensitive” contents. According to a November 2, 2006 report by Tangritagh (Tian’shan) Net, an official Chinese propaganda website, so-called “Autonomous Regional” Government in East Turkestan organized a “One Hundred-Day Crackdown Against Illegal Publications” special meeting and burned 215,943 copies of Uyghur-language books.

After the appointment of Chen Quanguo as the Communist Party chief in East Turkestan in August 2016, the Uyghur language has been outlawed as a medium in the entire educational field. Meanwhile, the Chinese regime stepped up their policy of confiscating and burning Uyghur- language books, including books about Uyghur history, culture and Islam, as well as other cultural and religious materials, such as Uyghur-related pictures, audio-video materials, praying rugs, etc. Not only the Chinese regime is banning and burning the Uyghur language books, but it is also giving out 5 to 20 year jail terms for those Uyghurs who either have read or kept the banned books. In addition, the regime has been arresting Uyghur authors, editors, singers, artists, and religious scholars. Even some retired editors have also been arrested for the work that they did before their retirement. In June, 2017, the Chinese regime broke into the house of 80-year old Uyghur author/writer Mirzahid Kerimi and confiscated historical novels he authored and other books in his house.

In this day and age, there are not many places in the World other than East Turkestan, where people can be arbitrarily detained, arrested and severely punished just because they have read a book. The burning of the Uyghur language books, the eradication of the Uyghur cultural heritage and the punishment of the Uyghur authors are not only an affront to Uyghurs in East Turkestan, but also an unforgivable insult to any human being who loves and cherishes freedom and knowledge. Such criminal action of the Chinese regime against Uyghurs is also a cultural genocide against humanity.

We, the Uyghurs, are powerless and helpless at the moment in our fight against the Chinese government’s atrocities, and cannot fight this battle for our survival alone.  We need the support of all the justice-loving people in the world.  If tens of thousands of people from around the world sign our petition, it may be possible that the United Nations will make a commitment and will act to stop the tragedy that the Uyghur people are facing today.

To read the full text of this petition, please click HERE.